do or do not, there is no try 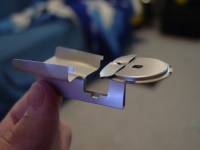 So this is how my Starship Enterprise turned out…pretty sweet huh?!

Hey! Man did I have something really important to say… and then I forgot it. But oh well. So how do you like my Starship…pretty killer huh? Yeah thats right. I really really hope there wasn’t anything on that disk that I broke. I guess I should’ve thought of that before I did it. Do you SEE how BORED I am. I actually sat down and made that thing. Oh well.
Fable comes out soon. For those of you who don’t know, its the highly anticipated RPG that everyone is, or at least should be, raving about! Its gonna have the coooolest morality engine, meaning that your actions are ruled good or bad, and then the world changes because of them. Your appearance actually changes depending on how you play the game. Now how awesome is that! So anyways, I have no money and really want the game so I came up with this idea. I can’t be guaranteed to get it from blockbuster, but I thought Hey! Why not try one of these online gaming rental sites! and so thats what I aim to do. Gamefly has a 10 day trial and I want to rent Fable off of it so I can be guaranteed to get it. That, my friends, is an awesome idea if I do say so myself.
Well I’m gonna pick at my xbox some more. This new hard drive kicks. It loads games soooo much faster when they play off the hard drive. Its nearly instant. I think I’m gonna put Morrowind on it and play, simply to see how fast it loads and because I won’t get any DDEs (Dirty Disk Errors for you non-gaming folk). Might as well get in as much gaming as I can before FRANCES knocks down my door. I shall listen to Jimmy Eat World and The Postal Service, as recommended by duckyxdale, in hopes that they will stop FRANCES from consuming my house! Later!

This site uses Akismet to reduce spam. Learn how your comment data is processed.