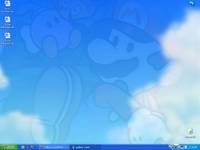 I discovered screenshots just now….yeah I know I should’ve known how to do that but anyway! Here’s my desktop. I found this wallpaper today and thought it looked pretty cool! WOO!

Man its way too late here for me to be posting stuff, but I’m not quite ready for bed yet. Well, let me rethink that, I could EASILY go to bed, but for some reason I’m stopping myself. I just keep listening to these awesome songs over and over. I’m stuck on Death Cab For Cutie and Motion City Soundtrack right now. Man they are so awesome! Anyway, it’s 2:35 and I think I’m gonna head out. Just thought i’d post my awesome wallpaper for all to see. This “Hello” program really is awesome. It makes posting pictures so simple. I just wish I could figure out how to post more than one picture for each post. I guess I could figure it out. I know its all about the “img src=“picture url”” (had to write it that way because the blog thinks its a picture if I do it right) tag, but i don’t feel like figuring it all out right now. I love HTML man. I used to make some killer sites back in 8th grade with HTML, now everythings so point and click. KIDS TODAY! Half of them have websites and don’t know what HTML is! geeeeeez! later!