hurricanes and kidney stones...can't get any better 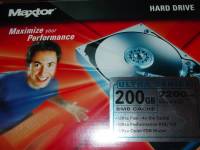 Heck yeah! 200 Gigs! I remember the days when it was thought that only 137 Gigs could fit on a single hard drive….boy were they wrong.

Well I have to say that I feel as though I’ve been bombarded with bad fortune today! This morning I woke up and my dad had a kidney stone, so off we were to the hospital. I was so SAD that I had to miss school…riiiiight. But yeah, luckily he passed the stone and all is well now. He had all these drugs and stuff to take but then didn’t really have to take any because he passed the stone so quickly. So thats the news for now! In other news, my hard drive came! I’m currently backing up my Morrowind: GOTY game, which is awesome because now I can play it and have no DDE’s! I’m so very excited. In other Xbox news, I called** Blockbuster** today in search of the much anticipated Fable. I learned that they have the release date set for Friday so I will be squatting outside blockbuster and waiting patiently for Fable….or I’ll at least ask my mom to go at 10 because I’ll be in class. I must have this game. I’ve been waiting for it for way too long. I don’t have school tomorrow! WOO! I’m so excited because that means I can stay up and play with my new hard drive…not that you can play with a hard drive too much, but maybe I can backup all my games. It really is unbelievable, the difference in playing from disc and playing from the hard drive. The load times are incredible. It really is amazing stuff. I hear that there are tornados landing in the county next to us. That sucks because we’re just a little ways from the county line. Maybe they won’t hit us. That would suck. Everything seems calm right now and I hope it stays that way. OH! AWESOME NEWS! **FireFox** 1.0 Pre-release is out! WOOO! Okay, okay, so I got a little too excited but it really is cool! They are having a big campaign at www.spreadfirefox.com where they want, I think, 1,000,000 people to download it in 10 days…or something close to that. So if you don’t use firefox, you should! Because 1. Its not a product of **Micro$oft**, 2. Its got tons more features, and 3. Its totally customizable! It really is awesome. They have a bunch of extensions you can use. You guys should check it out. Okay, this post is getting crazy long! Take it easy! Later!