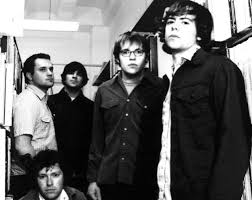 Another band that holds a special place in my heart has chosen to call it quits this year. The Get Up Kids are going on thier final tour here soon and who knows if they will ever be back. These guys are pretty much the definitive emo band. Guys that sing from the soul man. It’s hard to believe they aren’t gonna be making any more albums. “Something To Write Home About” still spins in my cd player and it never seems to get old.

src These guys just had that sound that pulled me in and never let me go. “I’ll Catch You” is mine and Stephanie’s song man, and I never get enough of that one.

I just want to know how many more of my favorite bands are going to leave me this year. First Blink and now this. I know this is old news but I didn’t find out about

it until recently and it just hit me like whoa! the get up kids aren’t gonna be playing anymore. I hope they keep going with the side projects though. As far as I know, Reggie and the Full Effect and The New Amsterdams are still gonna put out music, but it just doesn’t hold a candle to the magic that the get up kids make. Oh well. Another one bites the dust as the say. R.I.P Get Up Kids.

This site uses Akismet to reduce spam. Learn how your comment data is processed.