My Wife Loves Me

My wife is an amazing human being. I would not be nearly the person I am without her by my side. She’s a force in my life that I need in order to be remotely successful at even breathing oxygen.

She’s also a cruel woman who loves me so much that she’s forcing me into the gym. Imagine that?! Telling someone you care about that you want them to live for as long as humanly possible so they have to eat right and exercise. It’s pure lunacy. How could she do this to me? Should I not be allowed to sustain myself on sausage biscuits, pancakes, and pizza? I totally would, but NO! I have to “take care of myself,” or some nonsense.

Seriously though, I love her to death and I need the push. I really would be a bump on a log if she wasn’t there making sure I did the right things. I’ve baby stepped my way into a level of physical fitness that is a lot less fit than I should be. I’ve never struggled with weight for the most part, but I’ve also never tried to do anything to increase my level of fitness. Barring weight at all, I just can’t do a lot of physical exercise without wearing out pretty quick. I’m a developer so I sit at a computer most of the day. My brain gets an incredible workout, but the rest of me notsomuch.

She’s decided to pull my brotato, Jacob, into this nefarious plot to make me a healthier human being and he wants to go to the gym with me. It’s important to note that I have a HUGE anxiety attack when I think about going to the gym. It’s a problem. It’s a problem that I feel is completely rid

iculous and I should be able to get over it, but it’s a problem nonetheless. Also, it’s apparently not a good idea to take anti-anxiety medication and then go to the gym. I have no idea if there is truth to that, but Steph told me so I’ll just go with it. I also don’t have anti-anxiety medication so that would be a problem anyway. Jacob was just talking about the things we could do at the gym and I had to leave the room for a minute and breathe some. Oh sure, people can laugh at me over it, it’s stupid, but it’s real.

I was talking to her last night about this particular issue, and I think I came to the answer as to why I have such a negative reaction to the gym: kids are terrible. That’s it. Kids are awful human beings who can have a strong impact on the rest of your life and not even really know it. Sometimes this is a positive, but more often kids are terrible and you’re going to have a bad time. In my case, I was around a lot of kids when I was really young who were strong in areas of athletics. They were good at baseball, basketball, soccer, you name it. There was always a crew of kids that were just better at sports than me. Thanks to our school system, all kids have to play these sports during PE or whatever. The bad news is that they rarely are interested in teaching you HOW to play this stuff during those classes. So when you suck at basketball, they don’t take some time and work with you on how to get better, they just pick you last. The ADULTS in the room, let the kids publically shame you by picking you last and then just generally not throwing you the ball. It’s stupid and I hate playing sports because of it.

Back to the gym thing. Sports and the gym are one in the same for the most part. At least growing up, if you were in the gym it’s because you needed to get your body in better shape for a sport. I didn’t play sports, so the gym wasn’t a thing for me. The only people that went to the gym were the people that played the sports that I couldn’t play, and often the very same people that would let me know how bad I sucked when I tried to play. So it’s not the gym itself or the equipment or the stuff  you do there, its these people in my memory that cause me anxiety. They don’t exist in real life anymore, but they still bring back bad vibes when I think about lifting anything. When you’re a nerd like me, it’s like having to be on the constant defense of your own physical prowess. Even in the data center racking servers, “You sure you got that?” YES! Yes, I’m sure! It weighs 30 pounds, man. I can lift it, and believe it or not, I can also use a screwdriver. 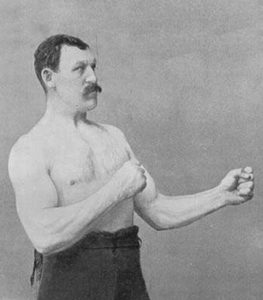 Anyway, I say all this to say that I’m going to go to the gym with Jacob. I’m going to fight through the anxiety and stress, and just try to do something good for me. It might not fade right away, but over time, I’m hoping I can fight off these demons and tell them to go screw themselves because I look like Thor…minus the hair.