I found an interesting commentary just now about the implausibility of having a trash compactor on the Death Star. The guy brings up a lot of good points. yep, this is just for you guys who care at all.
You can check it out here.
I also found this other super cool thing! If you’ve ever wanted to make something out of your old floppy disk, check out this creative art piece. It’s like oragami with plastic.
Make a Starship Enterprise out of a Floppy Disk!! Click Here. 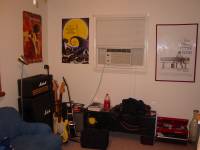 The other side of my room with my guitars, and my oh so glorious Marshall half stack! 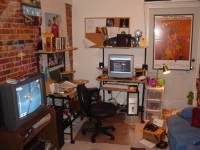 Man a lot of stuff happened today…or at least I feel like a lot of stuff happened today. It must be this beast of a hurricane that’s inching its way toward florida. The thing looks like its going to consume the STATE and move well into georgia and alabama. But who’s scared of a hurricane named FRANCES…honestly. If it was up to me, i’d be sitting on the roof, sipping margaritas, and singing jimmy buffet….but it’s not really up to me. Chances are I’ll be riding in the car with my parents, heading up to good ol’ Alabama to stay with relatives.
Anyway…onto happier things. I got Dean’s List at school today! heck yeah! Perfect 4.0. Now thats pretty cool. Not that it was hard to get. I’m in a Networking program, which is something I love, so of course I’m gonna be good at it. C’mon, i’m not being bigheaded. Anyway!
There was so much that I had to say during the day and now here I am with nothing to say really. Oh yes! I watched Evil Dead 2 today. Yes I have reached the middle of my journey to see them all…or I guess I’ve really reached the end, because I’ve seen Army of Darkness. But Evil Dead 2 was totally awesome! There was the Chainsaw, and the sawed off shotgun…and yes it made me smile. Bruce Campbell said “groovy” and it immediately shot to the top of my favorite movies list.
Well I put a new hard drive in my Xbox today….FINALLY! I’ve been wanting to do it forever and thought the hard drive i was gonna use was broke….it wasn’t. So I have a whopping 15 gigs!!!! (yes, that IS sarcasm). But, you know what, at least I can fit a couple games on it now. It also makes it faster to rip games to my PC, because it doesn’t have to read it off the disc now. Man that was taking forever, but so is this. So i’ve PROBABLY accumulated tons of xbox downtime that I have to make up for, just because i wanted to give my xbox more uptime…if that makes any sense at all. By the way, Yes i do have a modded xbox…just in case there was any confusion. Its super fun. Lots of enhancements!
Thanks for checkin out my Blog. Later!

CLARIFICATION: I do not smoke. The subject at the top is from the song “Counting flowers on the wall”. Just to let you know!

Man, let me tell you something cool about today. I have been playing with this Blog pretty much since I got home. Its really cool because I’ve been learning all kinds of stuff. But that is not the news of the hour!!
I was just gonna let any of you out there know that Kevin Rose of the screen savers is going to be giving out 1000 Gmail addresses on Friday at 8 EST. He’s just gonna post them on his website, www.kevinrose.com , and then let people click all the links. SO!!! If any of you don’t have a Gmail account, get with the program and check it out! If you miss it friday, you can catch it again on Tuesday when he will be giving out 1000+ emails during the screensavers.
Speaking of the screensavers. I have to say that I was disappointed tonight because I turned it on expecting to see a new set and co-host, but i guess the G4TechTV schedule was wrong. I thought the website said it was premiering September 1st, but i guess its not. Crap.
You guys should leave comments and stuff on here to make me feel SPECIAL! Not that I say much to comment on. That would be nice though…you know…to know people are taking interest in something you are doing.
I think I’m gonna play with this BLOG a bit more and customize it to my liking. Its kind of got it going…but alas…it is still a pre-designed template, and I have no cool links or my personality. I did add an AudioBlog…which I will try to do every now and then, just so you people can hear my beautiful voice…..yeeeeeees.
Okay well, not much else to say I don’t guess. Check back often. Leave comments. Send Money. Whatever floats your boat! Later!
site of the day: www.xbox-scene.com – your source for xbox modding

Me and my hero….Forrest Gump

Well that was fun. Consider today, a “Test the Blogger page” Day! I’m trying to figure all this stuff out. I promise this will be the coolest BLOG ever once I get everything figured out. That picture was posted with this thing called Hello…you have got to check it out. Its like an instant messenger/picture sharing thing. www.hello.com 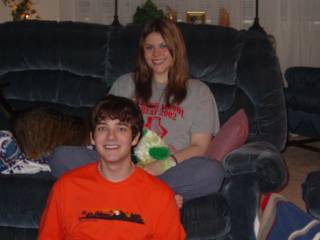 Hey look! This is me and Stephanie sitting in the living room at my house. I was playing with Legos….yes Legos…and she was suffering through “Open Range” with my parents….ewwww.

Hey hey hey!!
I got a new blog! this is cool. I really hope I can put interesting stuff on here. I don’t have the most exciting life but….I have a GMAIL! That’s currently my point of interest. I’ve been addicted to GMAIL for the past 2 days because I got an address there finally! fulltangninja@gmail.com. It’s just so cool. It’s got all these awesome features and stuff.
Man I need something new to get obsessed with. You see, I live in florida and my girlfriend lives in west virginia….this creates a need to occupy my time. I don’t really have anybody to hang around with so I find certain things to get obsessed with so my time goes by quicker and I can see her sooner……well at least make it feel sooner. I’ve been into things like LINUX, the Evil Dead Series, making old DOS games work properly, and other random useless geeky things. By the way, I thought Evil Dead sucked when I first saw it…but the more I think about it, it was genius! It was a complete gore fest, so if you have the slightest weak stomach you might want to pass. It didn’t have the one liners and pure attitute coming from Bruce Campbell that I had expected….or a chainsaw for a hand….but it was cool! I’m gonna rent the second one soon because I”ve realized that it was the bigger remake that had a budget worth talking about.
Anyways, This is my blog. Enjoy